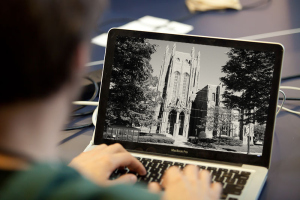 What do you do when your Homeschool Moms’ Online Book Club drags a little during the long, hot summer? Our group decided to stop reading books. Instead, we’ve been listening together online to Professor Joanne Freeman of Yale University as she teaches us (and many others) about the American Revolution. We have a Facebook group in which to chat as we listen, and we are having so much fun with it! Some of us have already taught this subject to our children  and are pleased to find we know the people, places, and events of which Professor Freeman speaks. Others in our group have younger children and are fortifying their knowledge before teaching this era of our nation’s history in their own home schools. Certainly, we are all learning.

This is an excellent foundation for an American History course for your homeschooled teens, or if you are really hardcore you could use it for Family Movie Night for 25 weeks. Or simply enjoy it yourself, to add another layer of depth to your own understanding of the era. Professor Freeman obviously loves her work and speaks very animatedly (and often humorously) about the founding of our country. She brings each hero, villain, and episode to life, while skillfully posing the big questions and providing perceptive and satisfying answers conversationally and memorably.

What exactly is the course about? From the introduction:

“The American Revolution entailed some remarkable transformations–converting British colonists into American revolutionaries, and a cluster of colonies into a confederation of states with a common cause–but it was far more complex and enduring than the fighting of a war. As John Adams put it, “The Revolution was in the Minds of the people… before a drop of blood was drawn at Lexington”–and it continued long past America’s victory at Yorktown. This course will examine the Revolution from this broad perspective, tracing the participants’ shifting sense of themselves as British subjects, colonial settlers, revolutionaries, and Americans.”

The home page for the course is here: History 116: The American Revolution

The home page includes links to the syllabus, sessions, and recommended reading. (My friends and I did not purchase the books. You might want them for your students, or you might want to just use the lectures as “gravy” for an American History course that you’ve already chosen.)

And here is the first lecture, “Freeman’s Top Five Tips for Studying the American Revolution.”

Amy Rose was a middle child growing up in a trailer park in the Midwest with talented parents who struggled financially. Her future life was easy to imagine until one magical day when she was thirteen, her fairy godmother gave her a box of oil pastels and a vintage textbook titled, “England in Literature.” Suddenly the entire wealth of riches found in the history of the West became to her a Holy Grail.  So she grew up and learned how to classically educate her own children who all turned out to be geniuses or at least mostly teachable.